The #1 Cause of Water Damage in Winter 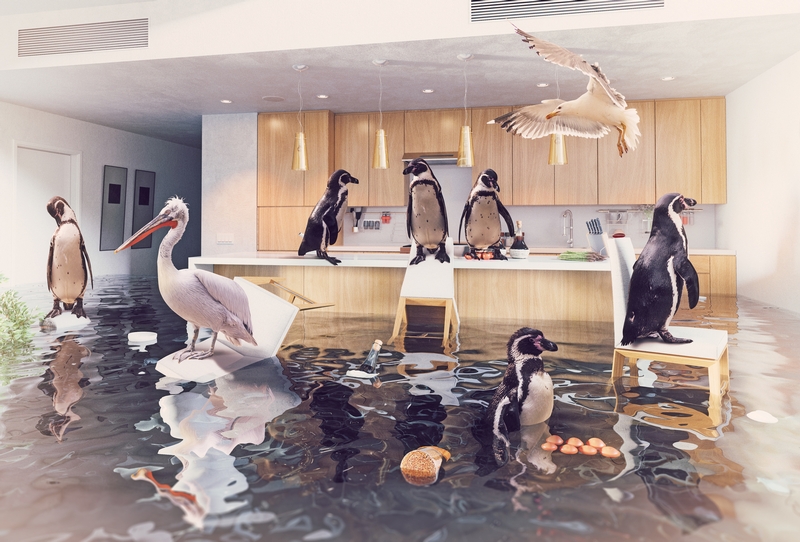 Three main types of winter water damage are common when the weather is below freezing.

Homes are damaged and lives interrupted every winter as water escapes into the home due to a frozen pipe that has burst. Burst pipes are one of the top sources of water damage that can be prevented.

Roof leaks are an enormous burden, which, again, with proper attention, can be stopped before transforming into an expensive repair.

Outdoor water sources can also be a likely source of winter water damage when left unattended.
When it comes to severe winter threats to your home, frozen pipes pose one of the most dangerous and costly problems. Follow our tips to prevent frozen pipes or, in a pinch, thaw them quickly before they cause headaches.

If you were to ask anyone to guess why pipes burst when they freeze, they would probably say that it relates to the ice’s expansion within a pipe. However, as logical as that may seem, it is actually incorrect.

The cause of a frozen pipe bursting is due to the pressure of the water in between the faucet and the ice blockage. Water molecules expand as they freeze; they take up much more space in their frozen form than their free-flowing, liquid one.

As the water freezes, the pressure is exerted between this blockage and a closed faucet. When this pressure eventually becomes too great, the pipe will burst. But, contrary to popular belief, it will not burst where the ice is. It usually gives out in a spot where there is little to no ice.

Some pipes and piping sections are likelier to freeze than other parts of your water supply system. Pipes running through the exterior walls of your house are more prone to freezing as well as other pipes that received the most exposure to the cold – such as those running through the attic crawlspace, unheated basement and garage.

You should also check the main pipe that is supplying water to your home, because it is particularly at risk of freezing and bursting.

Insulation is the number one protection against a burst pipe. Prior to winter, inspect all areas of your home that contain unheated water supply lines. Pipe sleeves can easily be purchased and fitted to the pipes in the garage, under the sink and beneath the bathroom cabinets. If pipe sleeves are unavailable, experts recommend using a quarter-inch of newspaper to surround the pipes, which offers an equally effective solution against the damage caused by sustained freezing temperatures.

The pipes that you need to worry about most as a homeowner are the ones located externally. This could include your attic, basement, crawlspaces, or your garage. Given that we can anticipate similar conditions throughout the remaining winter months, insulate or heat those pipes now while you have time.

The water damage and inconvenience that could ensue by putting this task off is not worth it; with a little preparation now, you could save money down the road. You also can insulate the entire area for the same effect, if you would prefer.

Indoors, maintain a cozy indoor temperature to prevent frozen pipes. Especially when you are away, run the heat continuously at no less than 55 degrees Fahrenheit. Experts also suggest maintaining a consistent temperature throughout the home.

This is costlier than turning down the heat at night, but it may prevent an even more expensive broken pipe fix. Repairing a burst pipe will cost money – there is no question about that. But water damage resulting from uncontrolled leaks can easily cost thousands of dollars.

When the first snow of winter arrives and temperatures fall, make sure to remove all your outdoor hoses from outside. Drain them and move them into an indoor storage area.

It is also a good idea to shut off valves to outdoor water sources if possible. When a water pipe in your home bursts without warning, a flood of water can lead to mold infestation or your roof can leak and cause massive property damage in a matter of minutes.

All outdoor water lines to swimming pools and sprinkler systems should be completely drained in the fall so that there is no moisture left inside to expand in freezing temperatures. Also, remove and drain hoses and shut off valves to outdoor hose bibs.

You can take all the necessary precautions and still be met with disasters.

Unless you’re a very skilled do-it-yourself kind of person, it is best to leave a burst pipe problem for a professional plumber to fix. Otherwise, you could cause further water damage to your home that can lead to thousands of dollars worth of repair and restoration. So, it is strongly recommended to let a professional fix or replace a burst pipe.